Today was supposed to be a sunny Sunday. After all, it’s nearing the end of May, so that’s only natural. Yet, it’s raining and the sky is bleak. So, instead of a Sunshine Sunday post, I made up a Fun-shine Fan-flash post. My friend Claudette Young, of the April Challengers opened a fun fan prompt a couple of days ago, to which I responded. I have long wanted to write some fan fiction. You know the kind – you watch a movie or read a book and you can’t help thinking there is something or someone missing there. So, you sit down and write it.

My Fun-shine Fan-flash Sunday is based on Blake’s 7, my favourite show on TV when I was a kid. 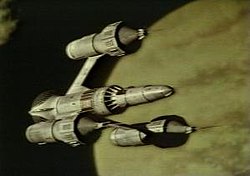 “Listen, Roj, I can’t stand it”, said Monica. “Sort things out with Avon. Find a way, make it up. I don’t know.” The tension in her voice escalated.

Blake only bit his lips. The deep creases on his forehead looked almost black.

“Monique,” he attempted tenderness, but his voice was not used to that. “I AM trying.”

“No, you aren’t! You two are in war. And we all see it. And it will tear us apart.” She hesitated for a second and then mumbled, “And not only that.”

Blake blinked for a moment, wondering what to say. He was amazed at her tearful brown eyes.

“Why are you crying?” he croaked.

He could see it now. Too absorbed in his revolutionary cause, he hadn’t realized that his little sister was on board with his crew of escaped convicts. Constantly on the run and hiding, Blake had blocked all human emotions as dangerous and missed to see how Monica changed when Avon entered the room. “Oh, my God!” he thought. Aloud he said:

If you’d like to get the feeling, here is the opening video 🙂